Opening a superbly upgraded and renovated Berbera International Airport, today, His Excellency the President of the Republic of Somaliland, Musa Bihi Abdi, prophesied that BIA will become a passenger and cargo hub in league with older and long-established African air gateways.

“BIA now boasts of having – perhaps – the longest runway in Africa. Along with the burgeoning, greatly developed port, I envisage a great future for Berbera Airport as one of the busiest, most used airports in Africa given its strategic location in the region,” president Bihi said. 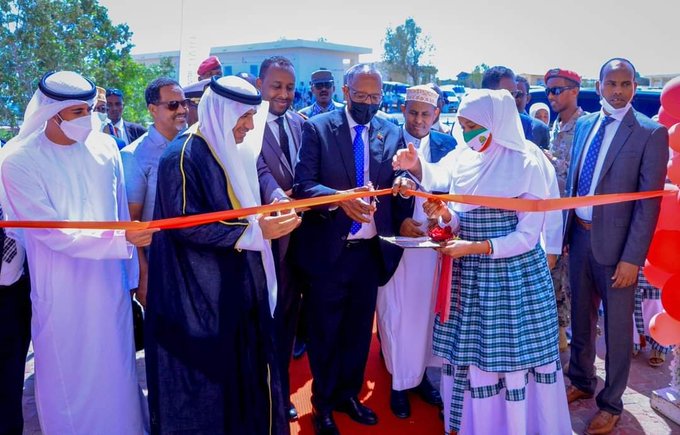 The president recalled a time when a great many of the country’s leading politicians opposed the development programs the then government of Somaliland signed with the United Arab Emirates only a few years back. The former Chairman of the Somaliland National Party -Waddani, and its current presidential candidate in the upcoming elections, Abdirahman Mohamed Abdullahi, was among the most ferocious opponents of the Berbera-centred projects.

“Abdirahman, particularly, called for the an arraignment of the then President, Ahmed Mohamed Mohamoud ‘Siilaanyo’, in an international court and for me as the Chairman of the leading party – Kulmiye – to resign,” he reminisced.

The President, however, put his words in a matter of fact manner attributing the peaked opposition to a difference of an opinion and a vision that did not give justice to the true potential of the projects.

“Abdirahman,” he added “corrected his views and came to see the viability of the projects in time. He said as much in his address of the recent convention his party held. Indeed, it is a mature politician that recapitulates a wrong stand. That is a commendable attribute”.

President Bihi, on a contrasting tangent, profusely thanked the United Arab Emirates for building the airport. On the same token he lavishly thanked the then Foreign Minister, Dr Saad Ali Shire, and the Somaliland Head of Mission in the UAE, Bashe Awil Haji Omer, for the key roles they have played in securing the agreement on which the Berbera sea and air ports were built.

“Both of these gentleman had bore the brunt of sustained insults and hurtful attacks on their persons. May Allah grant Dr Saad a healthy, long life. And, here, present today is Bashe Awil who had received the short end of vengeful and insidious backlash at the time. Without their insistence and determination the projects would not have come off the ground,” President Bihi said.

Previous articleTPLF claims drone attack in residential areas in Mekelle
Next articleWill the US send troops to Ethiopia?

From organic waste to high-end tech, how European interest is shifting to Africa’s biogas sector

Given the national interest, the critical implementation of the...

From organic waste to high-end tech, how European interest is shifting to Africa’s biogas sector

Given the national interest, the critical implementation of the...